The internet, notably the sharing of intriguing and entertaining movies and documentaries, has greatly aided the rise of Brazilian Jiu Jitsu. Some of the finest documentaries are featured here to watch if you want to learn more about BJJ, expose others to it, or learn about certain BJJ legends.

Even if it isn't emphasized in the current Jiu-Jitsu, the Arte Suave philosophy is still the most excellent approach to win. Precision and efficiency are the hallmarks of contemporary BJJ. The idea is to move as little as possible to get the most mechanically favourable position. Instead of pinning an opponent with force, leverage and skill are used to gain control. As the BJJ game advances, the ultimate aim is to use once again power and technique, this time to submit an opponent.

For years, I'd been thinking of doing a film or documentary, but it wasn't until I met Stevie Antoniou a few years ago that it all came together. He'd done a few "holiday highlight movies" as a hobby project, and I could see right away that he was a genuine artist with a minimal window of opportunity to work with him before someone else "found" him.

I recommended that he accompany me to all of the camps for a year and film everything, thinking we might compile it into a documentary. I didn't have big hopes—or even thought it was possible—but in the worst-case scenario, we'd have some good camp film to utilize for advertising.

Following a short vacation to California in late 2014, we put together a documentary. In the brief time, we were there, we met some great and inspirational people, and this film offers a little insight into the Brazilian Jiu-Jitsu culture in Southern California.

We want to have the opportunity to visit other schools and locations around the state in the future and create a more in-depth video.

I hope you find it entertaining. Eat Films and Progress Jiu-Jitsu collaborated on this film. James and I paid for the trip ourselves, and we're making the video accessible to view for free online.

However, we decided to create a Just Giving charity page so that anyone who wants to give may do so while also helping a worthy cause.

Rickson Gracie, the famed Brazilian / Gracie Jiu Jitsu master and mixed martial artist, was the subject of a 1995 documentary. The film follows Gracie as he trains for the Vale Tudo Japan 1995 tournament in Tokyo.

Rickson Gracie (born November 21, 1958) is a retired mixed martial artist and Brazilian 9th-degree red belt in Gracie Jiu Jitsu. He is a member of the Gracie family. He developed the methods given to them by Mitsuyo Maeda, a pupil of Judo founder Jigoro Kano, and invented Brazilian Jiu Jitsu (BJJ) / Gracie Jiu Jitsu.

Jean Jacques Machado was born on February 12, 1968, and is a Brazilian jiu jitsu practitioner. He is one of the Machado brothers, who number five in all (Carlos, Roger, Rigan and John). Machado has been practicing martial arts since he was a toddler, and is the nephew of BJJ co-founder and Grandmaster Carlos Gracie. His wife is Jaqueline Machado. Jullie and Camilla, their two children, were born on September 29, 1988, in Rio de Janeiro, Brazil.

Machado is well-known for his grappling skills, having won the ADCC Submission Wrestling World Championships in both his weight division and the open division in 2001.

BJJ belts represent a person's rank in the sport. Stripes are frequently placed at the end of a coloured belt to indicate advancement to the next colour. To be considered for a new belt, you must obtain four stripes. Eligibility is generally determined by skill level, tournament success, technique understanding, time on the mats, and overall passion for BJJ. Some schools demand testing before receiving a new belt, while others do not. A BJJ belt can be tied in various ways, but it is often worn over a jacket that is worn left to right. Place the belt in the centre of your stomach, loop it around your back, and transfer the ends to the opposite hand.

We hear the term "living the Jiu-Jitsu Lifestyle" a lot these days on BJJ websites, magazines, movies, and even among our training partners and friends. For the vast majority of us, jiu-jitsu has evolved into a passion that has influenced how we think, talk, look, walk, and behave... In a word, living the Jiu-Jitsu Lifestyle entails taking what you've learned from your Jiu-Jitsu training and applying it to your daily life. Every subculture has its lifestyle, such as surfing, skateboarding, bodybuilding, video games, CrossFit, rock climbing, etc.

We hear the term "living the Jiu-Jitsu Lifestyle" a lot these days on BJJ websites, magazines, movies, and even among our training partners and friends. For the vast majority of us, jiu-jitsu has evolved into a passion that has influenced how we think, talk, look, walk, and behave... In a word, living the Jiu-Jitsu Lifestyle entails taking what you've learned from your Jiu-Jitsu training and applying it to your daily life. Every subculture has its lifestyle, such as surfing, skateboarding, bodybuilding, video games, CrossFit, rock climbing, etc.

Technique-based jiu-jitsu is the concept of attending a seminar and seeing an instructor demonstrate an individual or a series of techniques. They might be new tactics and ideas that allow the student to learn more about a particular notion.

On the other hand, the conceptual-based approach requires me to look at specific methods more deeply than acquire new skills. The goal is to move latitudinal into the earth while relying on principles and intellectual notions to defend yourself.

Because one day, you will be in a situation where you will be pushed to go from idea to develop a new technique or movement, you will be able to solve problems far better with principles and conceptual knowledge than with technique-based understanding and instruction. Because of the notion, your moment of discovery will occur.

If you enjoyed this documentaries list about Bjj, check out also our collections about mma, boxing and muay thai! 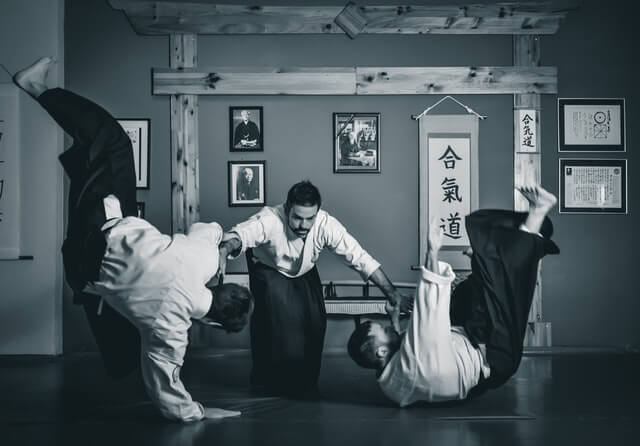